Iconic Ford Mustang up for auction on Trade Me 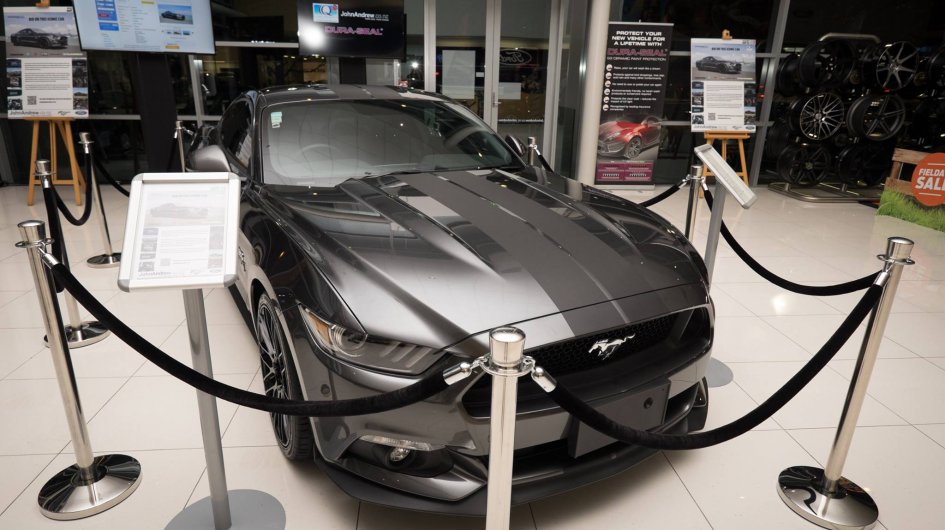 The iconic right hand drive (RHD) Ford Mustang will be listed on Trade Me with a $1 reserve for seven days on 9th June at 10pm. Proceeds generated from the auction will go to Camp Quality. The auction will conclude on Thursday 16th June at 10pm at John Andrew's annual Camp Quality Black Tie Dinner and Auction. The release of the first right hand drive Mustang has gained huge traction since its release late last year. The model is currently on back order till the end of 2016. One of the major benefits of purchasing this Mustang is the winner of the auction will get to drive it away on 17th of June.

The Mustang itself has been upgraded with packages as voted the best by the New Zealand public. Since June 2015 John Andrew Ford has conducted online polls to discover New Zealand's favorite Mustang. The various polls determined that the Mustang would be a fastback manual in magnetic colour, equipped with BM13 Savini D cast forged alloys wheels and a CTB/Ford Performance Racing Stage 3 power upgrade package for the engine producing 500kw/670BHP. The many upgrades featured on the Mustang have been donated through a number of John Andrew Ford's generous suppliers and take the vehicles RRP to an excess of $115,000.

“Mustang fans around the world have longed for this iconic car to be built in factory RHD and at last we have it. The excitement and anticipation around the arrival and deliveries of the cars has been amazing. The sales team at John Andrew Ford are proud that we can deliver this excitement with the help of our key suppliers and raise money for Camp Quality. Currently the Mustang has a waiting list and if you placed an order today you would be looking at late 2016, early 2017 for delivery. By bidding on this car you have the opportunity to jump the queue and take delivery as early as the 17th June. Happy bidding!” – Shawn Rushby, Ford Sales Manager.

“Camp Quality and John Andrew have had a long association even before the Annual dinner and auction commenced, this association was initially forged through support from John Andrew at our annual family day which we hold on the first day of the summer camp.  The first dinner and auction was held in 2010 to commemorate our 25thanniversary of Camp Quality’s first camp in New Zealand, which makes this the 7th event hosted and sponsored by John Andrew. The support we have received from John Andrew, and their clients and suppliers, at the dinner and auction is extremely humbling and appreciated.  Without continued support from committed supporters we just couldn’t provide the free services we do for the children. I look forward to seeing, and congratulating the winner of the auction for this exceptional vehicle.” -Geoff Barnett, Camp Quality Auckland/Northland Regional Manager

John Andrew has a long standing relationship with Camp Quality, having hosted Camp Quality Black Tie Auction and Dinner in the showroom for the past six years. “What Camp Quality do is more than just providing children living with cancer with a holiday camp, it provides them with the opportunity to just be children and do what children do! Camp Quality does all this through donations, which is why it is so important that we raise money for them.” – Paul Brown, Dealer Principal.

This is an exclusive opportunity to bid on the Trade Me auction that ends 16th of June and drive the Mustang away the very next day. Bidders can bid at home or attend the live streaming of the Mustang auction at the Camp Quality Black Tie Auction and Dinner. Tickets are available to purchase, limited places. $2,500 for a table of ten or $250 per individual ticket.

John Andrew Ford– John Andrew Ford has been around for almost as long as the Ford brand was first created, initially being established by the Andrew’s family in 1907. John Andrew Ford was one of the first dealerships in New Zealand to become part of Automotive Holdings Group (AHG) in 2006.